Leyla Kazim, author of the Cutlery Chronicles, just got home from eight months on the road. We were so excited to get a virtual postcard of one of her favorite meals from Chiang Mai, Thailand: Thai Biryani also known as Khao Mok Pa. 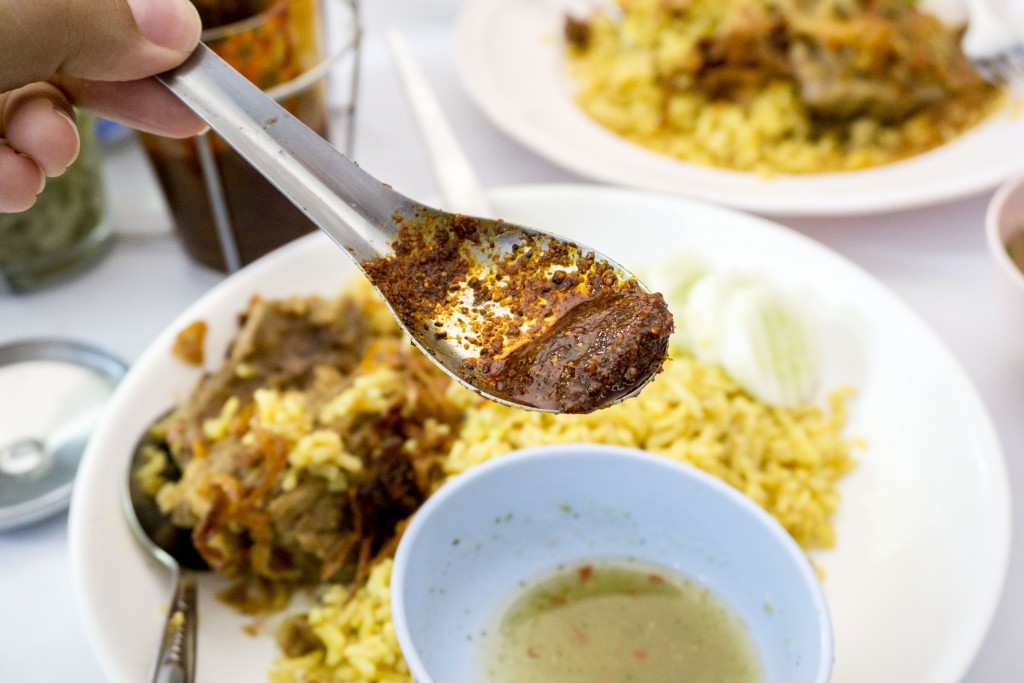 After a day getting drenched by super-soakers and buckets of water being thrown over us during the annual festivities of Songkran (Thai new year), we settled down in sodden clothes to an early dinner of khao mok, Thai biryani. Here with tender goat meat and spiced rice, topped with crisp fried shallots and coriander, served with a sweet and sour side sauce of coriander and mint, and a generous helping of dry roasted chillies, pounded and mixed with a bit of oil. Enjoyed at Khaosoi Isalam, down as the best place in Chiang Mai for this staple of the Thai Muslim community. 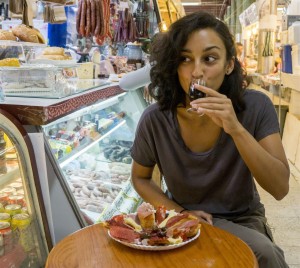 Leyla, was brought up in London by a Mauritian mother and Turkish-Cypriot father, and her blog chronicles her discovery of food around the world. Read our interview with this inspiring woman who incidentally has a degree in Astrophysics and her path to the Cutlery Chronicles below!

I’m a Londoner born and bred. I was raised there, I went to uni there, and I’ve lived there ever since. I’ve seen a fair bit of the world, but I still think my city is one of the best.

How did the Cutlery Chronicles get started?

My blog came about in October 2012 through me wanting to improve part of my skill set, things that were then a hobby – writing and photography. I also used to cook a lot (more than I get time to do now, at least), and friends would always encourage me to start a blog to share photos and recipes. These days, it’s intended as a personal anthology charting the places I visit, the cultures I experience, the food I eat, and the impressions they make upon me.

Having the blog helped me to improve and get noticed, and in April 2014 I quit my job to see if I could make a career out of the things I love – writing and taking pictures about food and travel. The time also coincided with getting a new and incompetent manager – a handy push. I eased into it for a few months, before I left the country to go traveling between December 2014 and August 2015. Since I’ve been back I’ve been picking up where I left off – it’s going well.

Any advice for leaving a 9-5 to pursue a passion?

Don’t be scared. Expect to work harder than you ever did when you worked for someone else. When you work for yourself, the working day doesn’t end, there’s little concept of weekends or public holidays. But the sense of achievement is far greater.Have a little safety net at hand before you take the plunge. It will take a while to find your feet. Always be nice to people.

Has your multicultural background influenced the way you travel?

It’s certainly helped me appreciate the full range of flavours the culinary world has to offer. I relish trying out new cuisines, new ingredients, things I haven’t had before. And a lot of that likely comes from the exotic and varied food I had at home.  For example, my mother is fro Mauritius. Mauritian food is one of the great Creole cuisines and is a combination of native French, African, Chinese, Portuguese and Indian, with many of the dishes created unique to the island. Due to the multi-national inhabitants of Mauritius along with the fact my mother spent a good amount of time living in Italy when she was younger, she is able to churn out international plates of exceptional flavour – Mauritian, Indian, Chinese, Italian, French. And my father is from North Cyprus. And that’s a whole other genre of fantastic Mediterranean flavours.

What’s your favorite restaurant in London?

Definitely a tough one. It’s like asking someone their favorite film, or favorite ever song! It depends on many things. I really like Som Saa in East London. They’ve had a residency for the past year in Climpsons Arch, and have their last service this month before they shut up shop and spend a few months preparing their new, permanent site. It’s the most authentic Thai I’ve had outside Thailand. In fact it’s run by Andy Oliver, who used to be at Nahm in Bangkok. And some of the chefs used to work there too.

Which place/city/country do you dream of going back to?

Definitely Oaxaca in Mexico. The people, the food, the colours, the climate – it’s a perfect storm of a city. Actually, the whole of Mexico. I had high expectations for that country, and I was not disappointed. I’d love to explore the rural areas more, hike the Sierra Norte, for example. And visit some of the smaller towns and villages.

The same goes with Thailand It’s such a huge country, and I’ve only really visited Bangkok and Chiang Mai. So much of it left to see (and eat).

And also Japan. What an incredible place. I travelled around it for 3 weeks. No time is enough time there. Everything about is like nowhere else.

South America – I haven’t even touched it. Canada, for the incredible landscapes and poutine. Mauritius – because it’s where my mother is from, but I’ve never been! The north east of India. The Caribbean. Everywhere, basically.

Anything in Bangkok and Mexico City.

Anything in Bangkok and Mexico City

Project Bly is a travel website built on the philosophy that to know a city, one must wander its streets. Send us a postcard about the best street food you’ve ever eaten to hello@projectbly.com

A perennial textile enthusiast with a matching passion for global social justice, Caitlin Ahern hatched the idea for The Thread Caravan after a discussion…