The sun had not yet risen when the muezzin of the neighborhood mosque, Sidi Ben Slimane finished the Adhan, the call to prayer. We paused to listen from the roof deck of Dar Zaman riad, catching the last lines before beginning our walk east towards our morning’s destination here in Marrakech: the bakery. 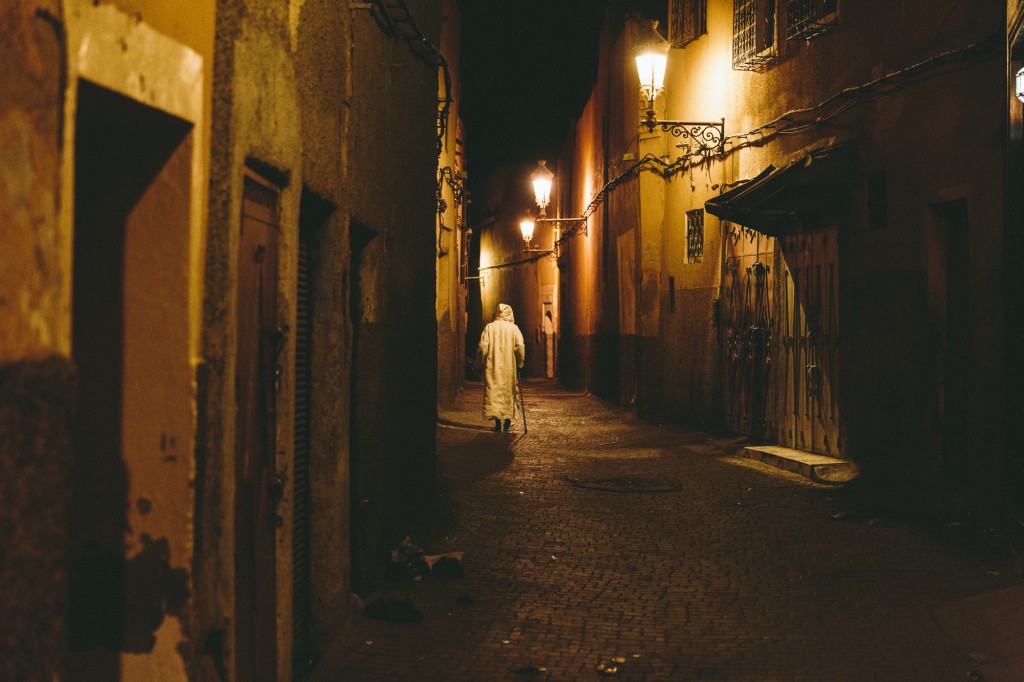 Despite the medina’s reputation for cacophony, the centuries-old market was still practically deserted as we followed Atman our guide for the day, through the warren of streets. When we arrived, the baker Abdullah was stoking the fire, waiting for his customers to begin arriving. He did not have to wait long. The first was a young boy dressed in his school uniform. He greeted Abdullah formally and they spoke about the boy’s family for a moment before the child dropped off his package and rushed out the door to school. 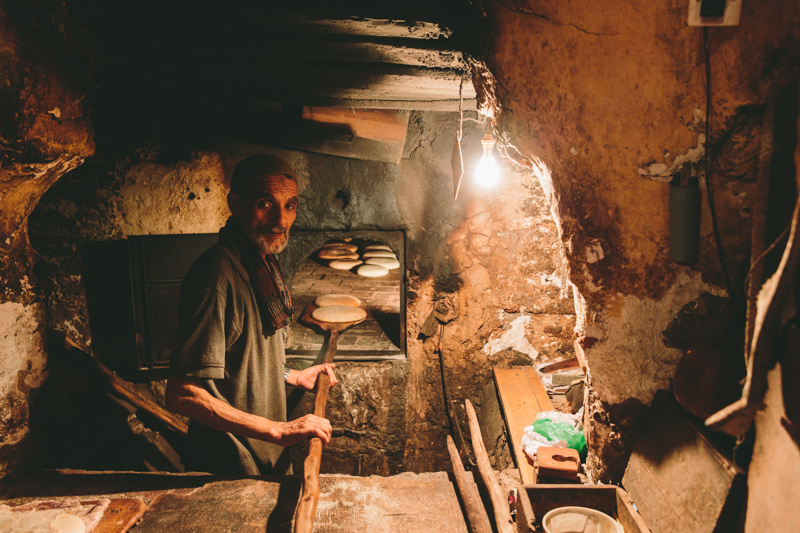 Abdullah the Baker. Photography by Shantanu Starick for Project Bly.

Abdullah’s ferrane, essentially a stone cavern with a wood-fired oven, is not simply a bakery: it is a communal oven where locals bake their daily loaves. And in Morocco, a country where bread is both ubiquitous and sacred, where a piece of bread dropped on the floor must be retrieved and kissed, and yet where few locals have their own ovens, it is an important local institution. Women in households across Marrakech wake up at dawn every day to mix and knead the dough. By the time the rest of the family has awoken, the dough has been rounded into balls, wrapped in cloth, put on trays – and often handed to a child en route to school to carry to the local ferrane.

On the way to the neighborhood ferrane. Photography by Shantanu Starick for Project Bly

Abdullah, a kind-eyed man with a well-trimmed beard, greeted each customer by name as he pushed the rounds of dough deep into the glowing clay oven. Half an hour later he reached towards the fire with a long paddle and retrieved the now-crusty loaves, known in Arabic as khobz. Carefully, he placed each khobz on the family’s cloth and left the loaves to cool on the racks at the back of the room; at lunch, his customers would collect the baked loaves and, at the same time, drop off dough for dinner. To my untrained eyes, all the loaves looked identical. But Abdullah, who has spent 40 years baking for the neighborhood’s families, told us that he always knew whose bread is whose just by looking at its shape, texture and markings. 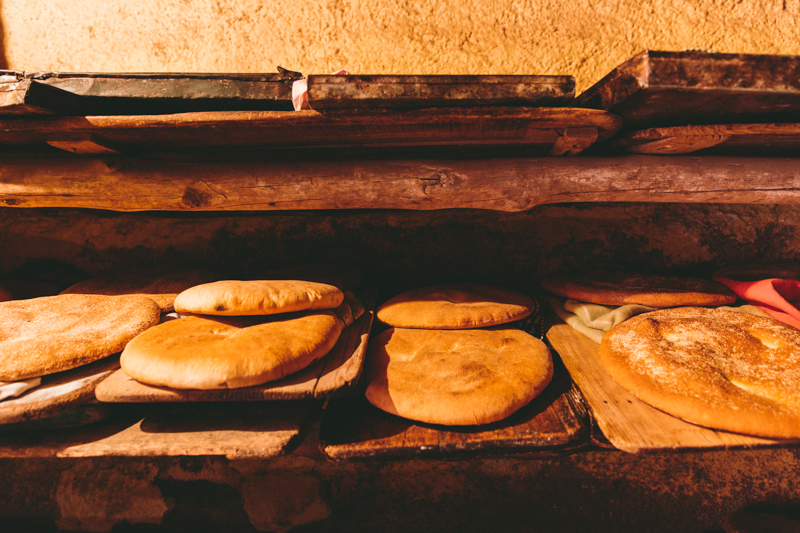 Stepping out of the warm semi-darkness of the bakery, we made our way to the local markets. We walked past Bab El Khemis, the gate that leads to the local flea market and the road to Fez, and then turned south towards Bab Ailen. Walking along the edge of the city’s walls, we reached the bustling food markets of Bab Ailen. Here, Atman touched his heart as he greeted friends and showed us the stalls where his mother and sister buy their vegetables and the butcher where his father buys sheep to slaughter for special occasions like Ramadan. 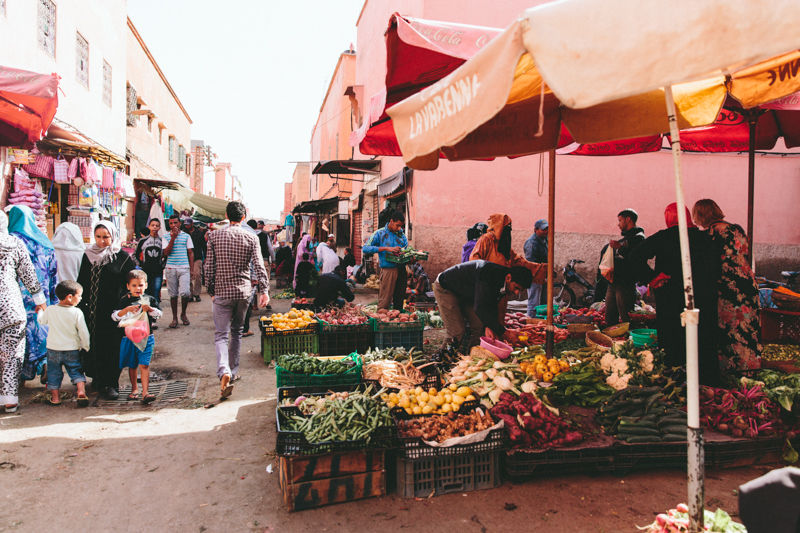 As we walked past a local store selling red brick pottery, Atman pointed to the deep urn-shaped pots, called tanjia. These are necessary to make tanjia marrakshia, not to be confused with the tagine, which is known as the dish of the city’s bachelors: it is one of the only dishes made, almost exclusively, by men. It also requires almost no cooking expertise. 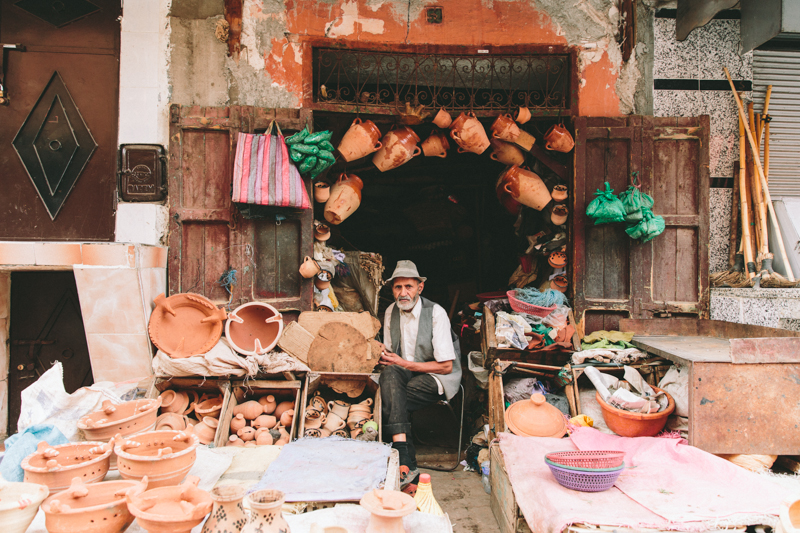 Interestingly, tanjia marrakshia is made entirely outside the home. For a man making the meal, the first stop would be the local butcher, where a kilogram of bone-in lamb would be mixed with the butcher’s own ras-al-hanout spice blend before being stuffed into the tanjia. Next, the pot would be carried to the vegetable market and handed over to each stall to be filled up with the necessary ingredients: onions, garlic, parsley, coriander and, finally, preserved lemons. As we continued to walk through the market, Atman explained that here, at the edge of the souks, would be the last stop for ingredients. Spice merchants would sprinkle saffron, cumin and bay leaves into the neck of the tanjia. Only now would the dish be ready to be cooked.

Just as locals bring their bread to the ferrane for baking, though, so must they bring the tanjia elsewhere to be cooked. In an alley behind the hammam, Atman introduced us to Aziz, Aziz is the hammam farnatchi: sitting on a low stool in a room that looks over a pit of white ash, Aziz’s job is to tend the coals that warm the bathhouse’s hot water and steam. His unofficial job, however, is to watch over the cooking of the tanjias.

A bathhouse may seem like an unusual place to cook. In fact, the smoldering ashes create the perfect environment for slow-cooking a rich stew. Over tea, Aziz explained  that he uses his lemonwood spoon to mix all the ingredients together before covering the neck of the tanjia with foil and tying it with string. Motioning into the room, he showed us each of the tanjia pots nestled amongst the ashes; each pot would be retrieved six hours later, once the meat falls off the bones and the bone marrow richness seeps through the dish.

A cup of tea and tangia pots at a hamam. Photography by Shantanu Starick for Project Bly.

At twilight, we made our way Djemma El Fna, the city’s communal dining hall. Hoping to catch a glimpse of someone carrying a tanjia home, we were quickly distracted by the nightly dance of the square. We watched circles form around ancient storytellers and food carts start arriving from the twisting streets. As the evening call to prayer echoed along the walls of the square, friends, families and strangers sat side by side eating everything from lamb brochettes to snail soup. Watching the khobz being passed down the long tables, I remembered a Moorish proverb that we once heard, “that one should choose their neighbors before their house.” It seemed more apt than ever in this city where both eating and cooking were truly communal affairs. 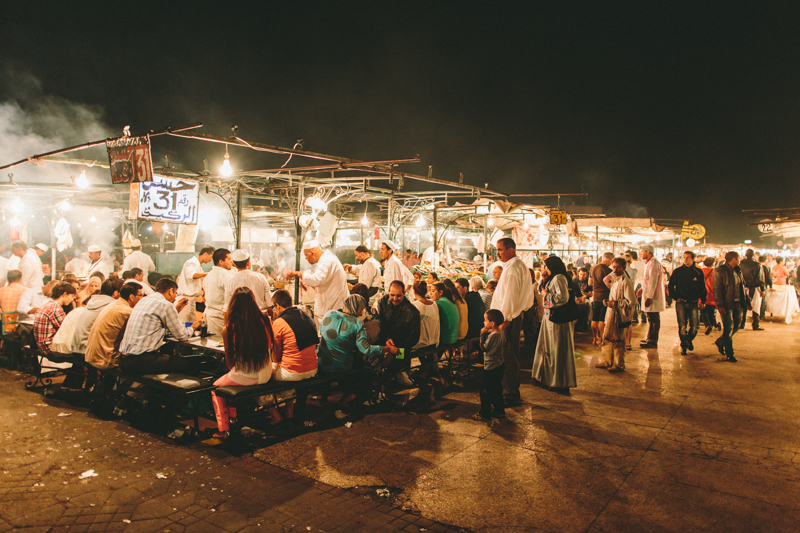 Atman is available for intimate walking tours of Marrakech. His cell phone number in Marrakech is 212 671234840.

Katherine Preston writes for Project Bly, a travel site built on the philosophy that to know a city, one must wander its streets. Learn more at www.projectbly.com and follow their travels on Twitter and Instagram.

It always starts with a memory. Hajime Kimura was sixteen when he saw his first horse race.