The love locks that adorn the foot bridge spanning the Vistula River often distract people from a statue of a white pig carved out of marble with it’s feet trussed together ready to be roasted. Artist Mateusz Okoński,a recent graduate of the Kraków Academy of Fine Arts suggests that the pig in the river represents rejuvenation. Dating back to the 10th century, Krakow is a city steeped in history and culture but it’s also a University town, and its lifeblood, constant reinvention and inspiring and vibrant art scene comes from students like Okoński . We put together a walking art tour which includes our favorite galleries, art installations, artist studios, street art and cafes frequented by artists. This tour starts in the neighborhood of Podgorze and ends in the neighborhood of Kazimierz, but you can start in either direction. We’ve included a map at the bottom of this post!

A Pig in the River. Photography by Jakub Sliwa for Project Bly.

Follow Starowislna in Kazimierz to the Powstancow Slaskich Bridge to Podgorze (and of course don’t forget to check out the pig in the river while crossing the foot bridge!) At the corner of Limanowskiego and Węgierska Streets is local Krakow artist, Bartolomeo Koczenasz ‘s three dimensional installation titled Three Perspectives.  Podgorze  has a tragic history and images from different periods of its history are pasted so that its chronological past is fragmented.

Podgorze, formerly part of Austria became a part of Krakow only in 1915. It’s darkest period was during World War II when the Jewish population of Kazimierz was moved here into a Jewish Ghetto established by the Nazis. An estimated 60,000 people lived in the Ghetto, and for most it was their last stop before being deported to the death camps of Auschwitz-Birkenau. After World War II, under Stalin and until the fall of the iron curtain, Podgorze was mostly a ghost town. While several communist-era apartment buildings were constructed here, few people voluntarily chose to return to the site of so much horror. Today, Cracovians are reclaiming these streets, and it is home to several artists, galleries, and the MOCAK Krakow Museum of Contemporary Art which opened its doors in 2010.

Two Crakovians who have been instrumental in infusing new life into Podgorze are art historians, Teresa and Andrew Starmach who own the Starmach Gallery. The Gallery which is housed in a renovated Jewish house of prayer opened in 1997, and has hosted more than 64 exhibitions of both local and Eastern European artists. Currently exhibited are haunting black and white photographs by Czech photographer Josef Koudelka of the Soviet Union invasion of Czechoslavakia in August 1968. The Starmachs also represent and promote Polish artists such as Marek Chlanda and Jan Tarasen.

Down the street is Krakow’s most controversial street mural titled Ding Dong Dumb by Bolognese artist Blu which shows a giant raised bell used as a microphone towering over dazed confused heads. A criticism perhaps on the authority of the Vatican? 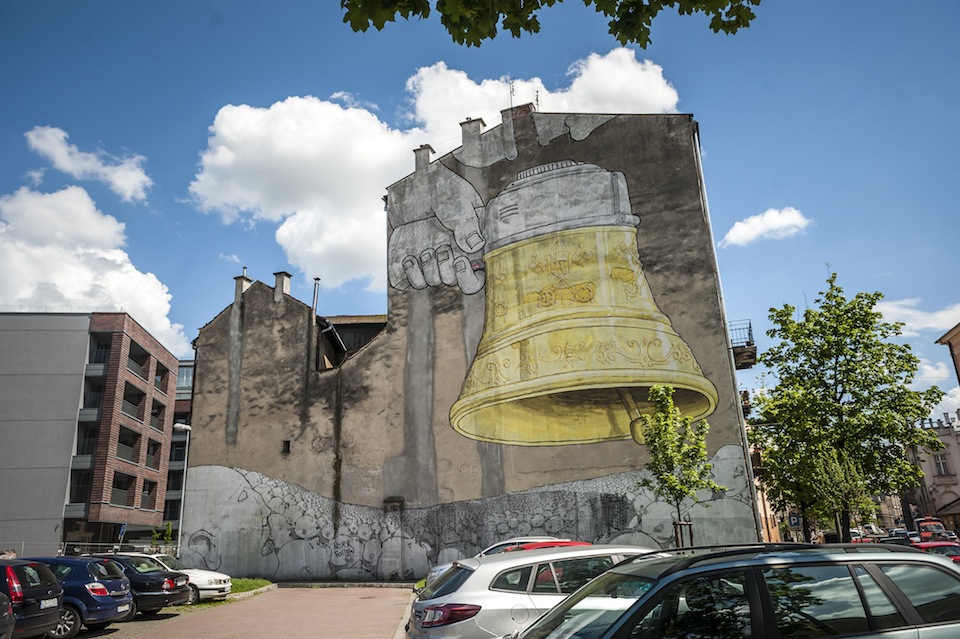 Auscwitzwielickza is a concrete tunnel with the words “Auschwitz” and “Wielickza” running into each other. Struck by tourist agencies that advertise “excellent entertaining day trips” that combine the somber memory of the savage Auschwitz-Birkenau concentration camps with “the beautiful salt mines of Wieliczka”, conceptual artist Miroslaw Balka created the sculpture as a commentary on contemporary culture and how it deals with historical remembrance. 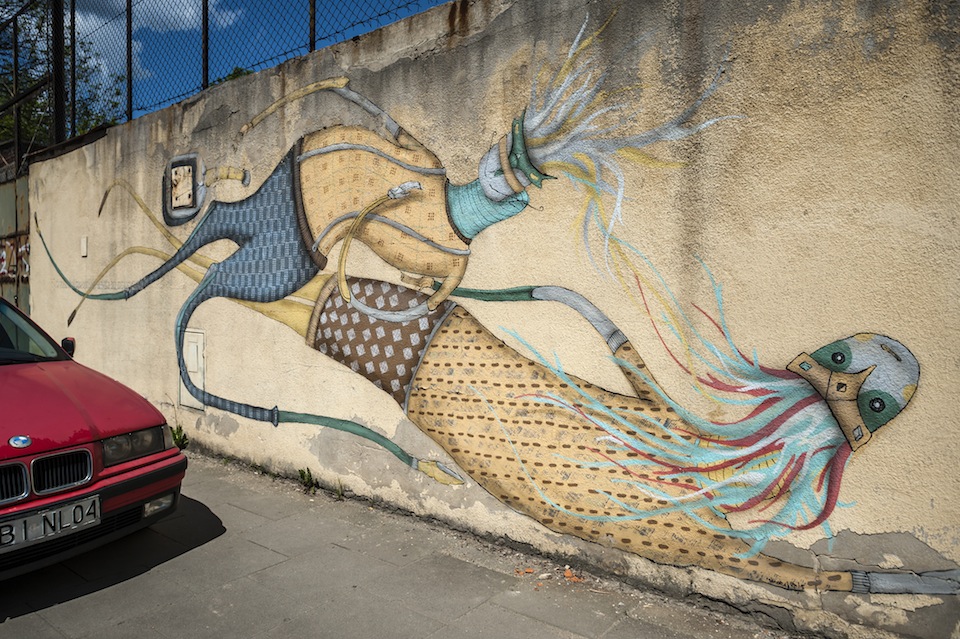 MOCAK, which opened in 2010 is located steps away from Balka’s installation and houses an impressive permanent collection including  Hungarian artist Csaba Nemes, Russian abstract artist Eligiusz Bielutin (1925-2012) and Jarosław Kozłowski, one of Poland’s most famous contemporary conceptual artists. 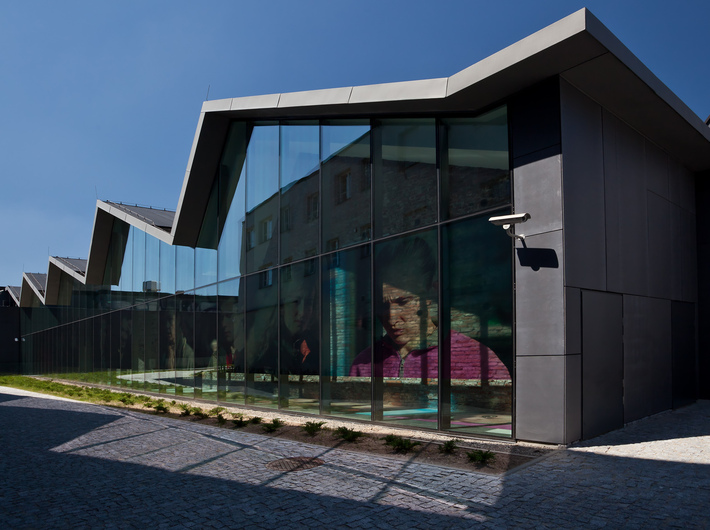 6. The Art Warehouse District of Zablocie

Next door to MOCAK is Zablocie, a hip industrial neighborhood of warehouses where mechanic workshops neighbor art studios, one of which belongs to Monika Drozynaska, a conceptual artist. Born in the small, mountainous town of Gorlic, 2 hours southeast of Krakow, she moved to the city to study art and design at Krakow’s Academy of Fine Art. Fascinated by the idea of bringing fashion into the public space, one of her first installations, entitled the ‘Hand of God’, used underwear elastic to trace the path of Maradona’s famous 1986 football goal shot. More recently, as part of a display in Krakow’s Museum of Contemporary Art, she created a 135 meter-long scarf that can embrace a 100 people at once. Formed as a functional piece of art, the scarf can be bought in one meter or more pieces. 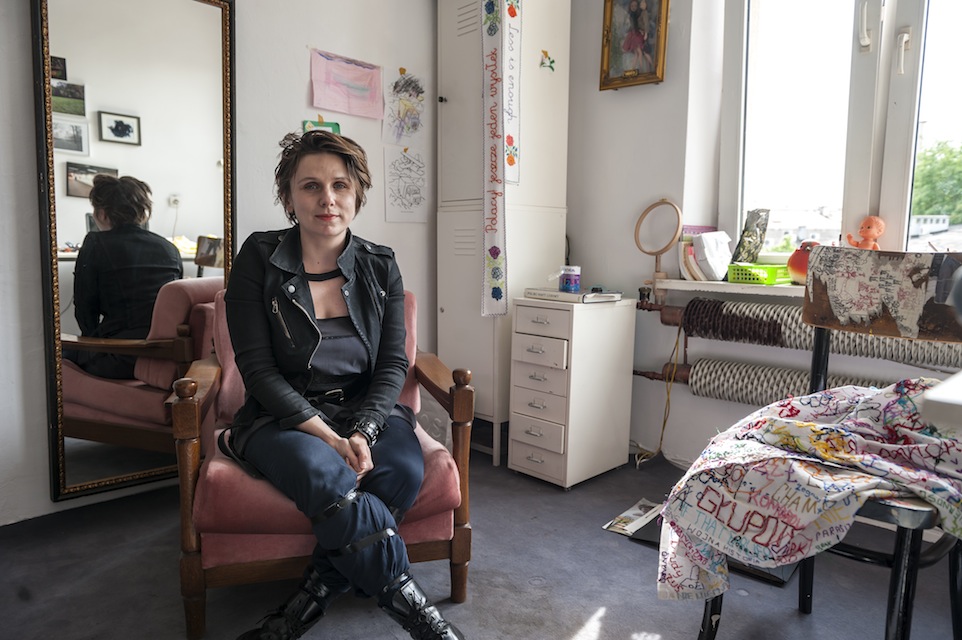 Monika in her studio in Zablocie. Photography by Jakub Sliwa for Project Bly

If you’re getting hungry, now’s the time to stop for lunch or a coffee. In the same compound of warehouses as Monika’s is Coffee Cargo (Przemysłowa 3), a coffee shop housed in a series of old shipping containers. Next door is cafe Bal (Ślusarska 9, 30-710 ), frequented by students and artists, it’s light and airy, and a great place for lunch. 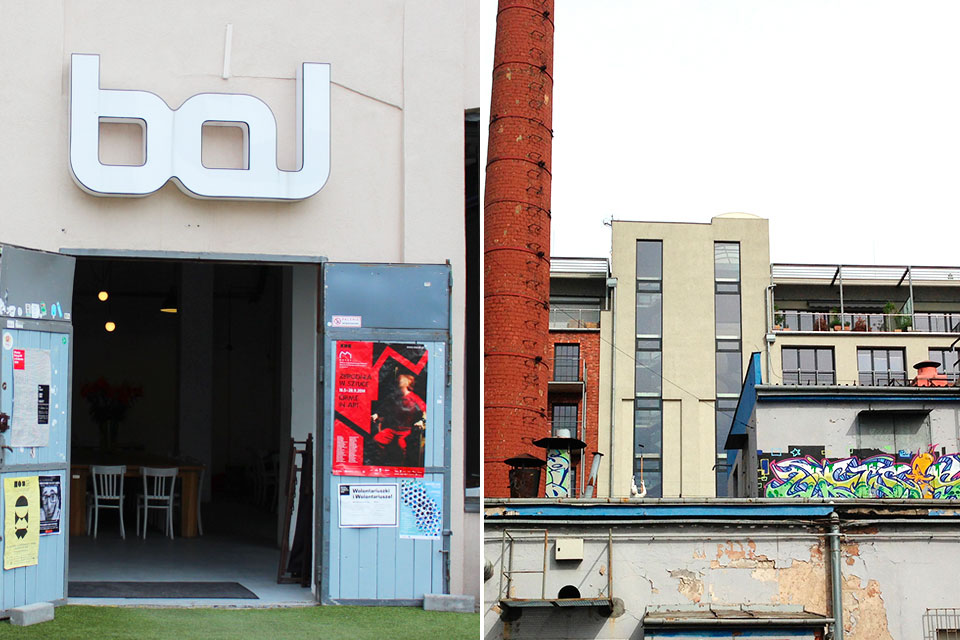 Kazimierz, the historic Jewish District has seen more rejuvenation than anywhere else. International and local street artists like Pil Peled ( corner ofWąska and Św. Wawrzyńca), Pikaso ul.Św. Wawrzyńca 5, and Kuba (ul. Bozega Ciala) have reinvented drab, gray walls. The streets are lined with cafes, bars, antique shops including one of our favorite artist’s studio and gallery. Contemporary artist and illustrator, Lookarna works out of her street-side shop whose walls are decorated with her drawings and poetry. We couldn’t get enough of her whimsical prints which you can purchase here! 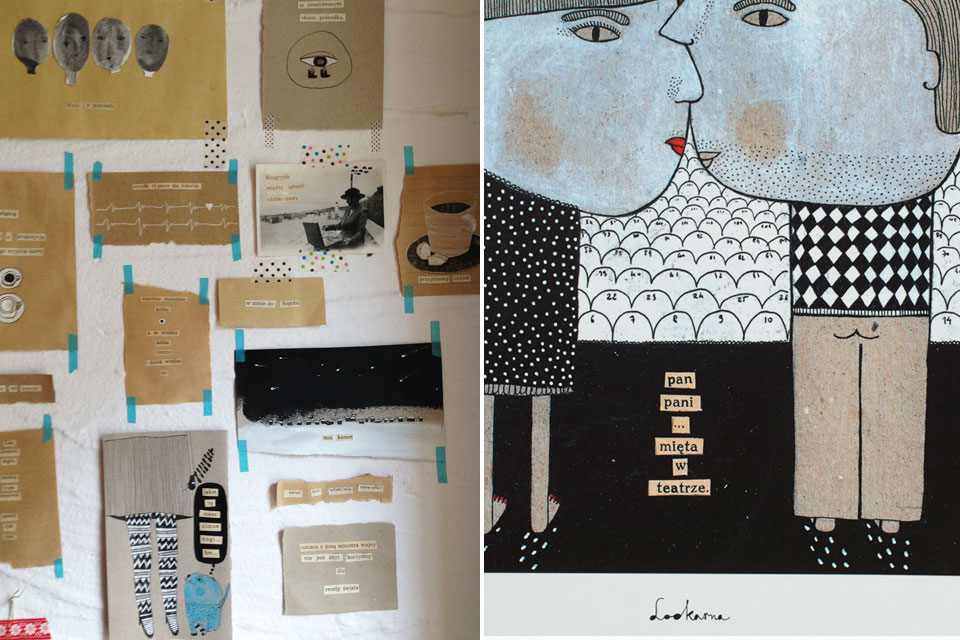 A great place to end your art walk and stop for a beer is Alchemia, a bar frequented by musicians, poets, artists and students. Small intimate rooms are filled with art, and in their collection is a piece by reclusive local sculptor Andre Siek. Born into a family of artists, Andrej creates spontaneous, and often autobiographical, sculptures from wood and stone and is inspired by folk tales and mysticism. Living simply on the outskirts of Krakow with just a mattress, two chairs, a fireplace, surrounded by his art, Andrej describes his work as a compulsion. 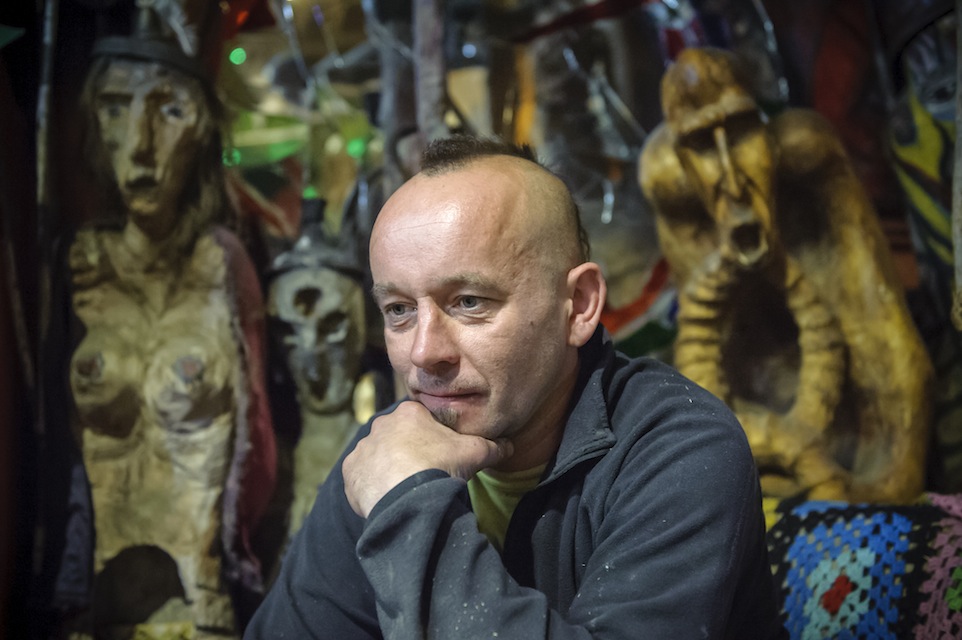 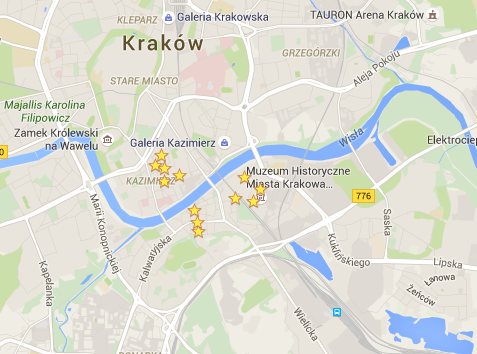 Project Bly believes that to know a city you have to wander its streets, and we bring alive the streets of cities around the world through story and photography.

Explore the streets of Krakow, Poland